At the time of this post, Adster is hiring and in that process – an opportunity to reflect on how we’re presenting ourselves, our culture, and marketing agency culture in general.

I think we’d all agree that ‘tech’ culture, or at least the appearance of tech culture, is expected to be young, cool, hip, relaxed, and flexible. So if every single tech & marketing company in Alberta and across the universe promises this same working environment, how does Adster stand out?

Don’t get me wrong, we have all the prerequisite ‘cool’ stuff (we’ve got a prize wheel in here after all)… but if you’re coming to work at Adster because we have free pop and a foosball table, we have failed dismally in how we’re presenting ourselves.

Let me put it another way:  If you’re the type that buys a car only because it includes a free trip to Las Vegas…

And hey, it’s not like I’m opposed to putting you up at The Venetian for a weekend. Think of it like a big box store price guarantee: You show us a better offer and we’ll BEAT it by 5% – just know that you’ll be joining a team of some of the most highly competent and caring people I know. So you’d better be ready to earn it. They have.

Whether it’s shows like Silicon Valley poking fun at tech culture, or a never-ending line of Zappos copycats, I’ve come to the realization that we probably won’t ever be able to ‘perk-out’ like Google (though getting a slide in here would be sweeeeeeeet), and creating genuine company culture in a small organization is a team effort.

Our best bet is creating an environment – and a process – for figuring out what makes you uniquely ‘you’, giving you a real say in what happens around here, and ensuring that we’ve built a system around giving you the best support possible.

At its core, I think that’s what our culture (and perhaps even small team culture) is all about.

We genuinely give a shit about improving the quality of your life through your experience at Adster, and we’re committed to backing those words up with real action.

Before making this post, I decided I’d better check my math and ask for some ‘pull no punches’ comments on culture here from the current team.

Reviewing these replies, I consolidated common words and ‘word clouded’ anything that appeared more than twice. Check it out: 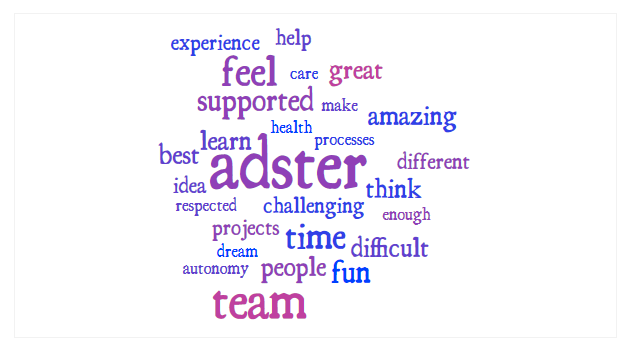 If you’re considering a position here, I would encourage you to ask any of our current (or previous) employees for their candid replies.

And for those that are up to the challenge, I can’t wait to meet you.