As I was about to power down the PC on my way out of the office yesterday, the lovely Lisa sent me a rather perplexing message. And I quote:

After an ALL CAPS Skype exchange, it was revealed that Google had taken it upon themselves to make a rather significant update to their Adwords terms, and it damn near snuck right by us.

It would seem as though in campaigns that use Location extensions along with Call extensions, the Google My Business phone number (ie: ‘Actual’ phone number) will be the one that displays in your ad, regardless of which number you have selected as a call extension (maybe, more on that below).

This is big news for those of us that are fond of consistently tracking things like, oh, say – the effectiveness of marketing campaigns.

While Google no doubt has it’s heart in the right place, there are 2 concerns that I find…well…concerning.

Suffice to say, learning about such a significant update – from a client no less – is troubling. And, as of today, there appears to be very little information floating around the internet on this subject.

Surely we – Featured Google Partner type folk – would be in the know on such matters?

And that leads me to concern 2.

Concern 2: The use of cryptic language

Mobile and call only campaigns? *So* hot right now.

Given this update is most likely to impact these parts of our advertising efforts more than others, Google has mercifully given us a way to opt out of said update: 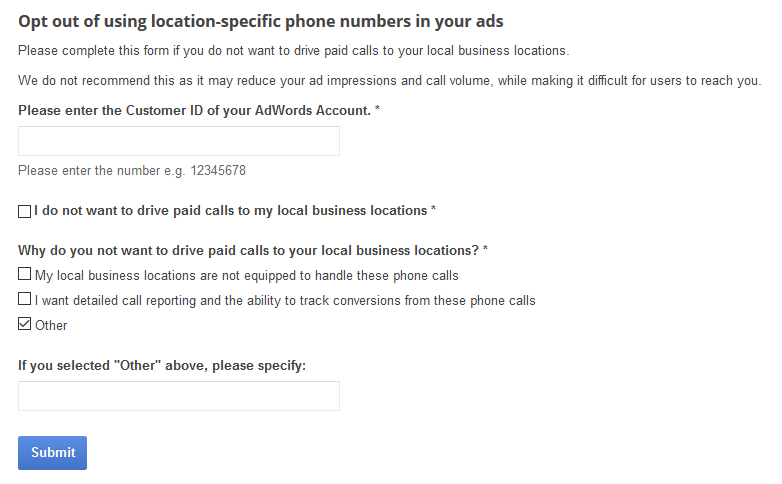 Unfortunately, it is accompanied by rather confusing – if not ominous – language. In this post from Search Engine Land, they were able to determine the following:

Asked why the email says a location-specific phone number “may be used” instead of “will be used,” a Google spokesperson told Search Engine Land that they are continuously testing. That means it’s possible the ads could potentially show with either number.

Everybody got that? Good, ‘cuz I don’t.

“We do not recommend this as it may reduce your ad impressions and call volume, while making it difficult for users to reach you.”

As much as we don’t wish to lose our precious call data, we surely do NOT want to do anything to an account that may reduce our ad impressions and call volume.

“Making it difficult for users to reach you”? I think that speaks for itself.

To wrap it up, here’s the lay of the land as of late afternoon, Friday the 6th of Jan:

We’ve fired in an email to our beloved Google rep, and hopefully he is able to shed some light on this sooner than later.